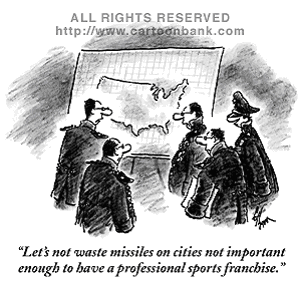 Frank Cotham got this published in The New Yorker in June of 2001.  Who are these guys?  By 2001 only China and Russia still had enough missiles to bother aiming them at specific U.S. cities and neither of them has any economic or military interest in doing so.  Or are these U.S. military planners trying to figure out where to deploy defensive missiles?
Posted by Blue Sky GIS at 12:47 AM