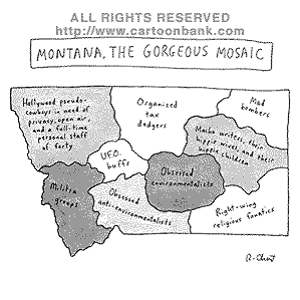 The "gorgeous mosaic" reference in the title comes from New York City Mayor David Dinkins who described the city's diversity thusly.  So this is a joke about diversity, or possibly the lack thereof.

Clicking on it might not make it large enough to read.  Here's a run-down of the captions:

This version will be larger and more legible.  It comes from that great site "Strange Maps" which has a more in-depth discussion of it than i care to tackle right now.  :

I also want to mention that today, with Montana, this is the 15th state referenced in this blog.  Only 35 to go (and i already got D.C.)
Posted by Blue Sky GIS at 12:47 AM