I want my solar parity 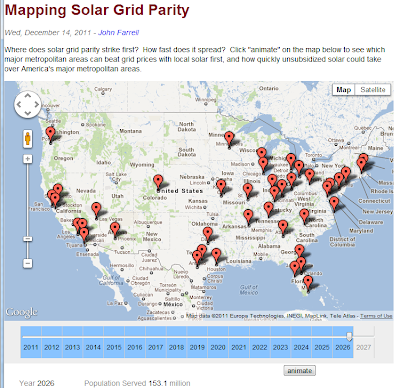 John Farrell over at Energy Self-Reliant States made this interactive and animated map mash-up that shows " which major metropolitan areas can beat grid prices with local solar first, and how quickly unsubsidized solar could take over America's major metropolitan areas."
Link to see when your city can bask in off-grid rays: http://energyselfreliantstates.org/content/mapping-solar-grid-parity
While I'm thrilled that some cities begin to achieve parity as early as 2013, I gotta wait until 2026 to get mine.
Posted by Blue Sky GIS at 12:47 AM