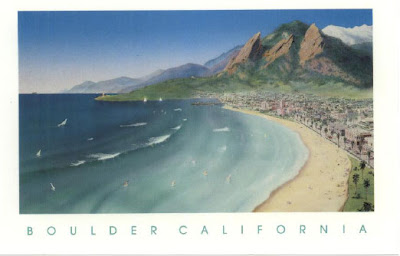 When I first moved to Colorado many moons ago there was a front page article with a photo about a couple who had proudly made a map showing how an earthquake would drop most of the western United States, including the Rocky Mountains, into the Pacific Ocean, leaving much of the Denver Metro Area as beachfront property.  This couple was very serious and fervently believed in this theory of theirs.... or so the article claimed.  I've not been able to find that article (although I haven't actually tried) but what appears above is an artist's rendition of kinda the opposite... as in this is what it might look like looking south for almost everything east of Denver to become ocean... again I should say, since back during the Cretaceous it all was ocean... as one can see in this animation.    But actually this could be a convoluted global warming type theme... so we'll add this other one by Chip Bok which is very much global warming oriented and call it a a day.