Who the bleep is Colonel Bleep?

The closest thing that I used have to a Thanksgiving-themed map-related comic is one involving a traditional song and bad directions:

I had scheduled this post to include a request for something better, but then one Nadia posted to the Portland GIS group a link to a map of Thanksgiving ingredients.  And while it's only a little cartoony, I'll take it. 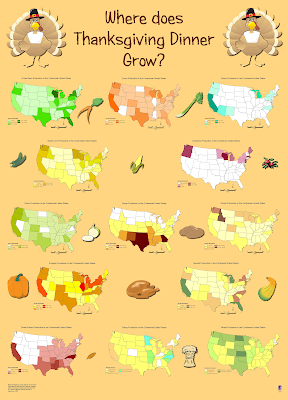 If you have any better Thanksgiving-themed map-related comic let me know.

I found a tool online TubeChop that should let me zero-in on the specific map-related part of the cartoon (so that you don't have to sit through all 10 minutes of it):

The quality of the animation is even worse than the standard Hanna Barbara cartoon, although to be fair this is a pilot.  And what the devil is Colonel Bleep riding? A warp speed unicycle? Sheesh!

And the description of his sidekicks, Squeak and Scratch is not to be missed:


With Colonel Bleep are two unusual companions to share his exciting adventures. First, there is Squeak, a happy-go-lucky boy of the present, very much like you! Except that Squeak is a puppet and cannot speak a single word. Because as you all know, a puppet cannot talk for himself… Second there is Scratch -- an expert on the past, who, like other cavemen, should really have become extinct several thousand years ago.