Round and round the world she goes 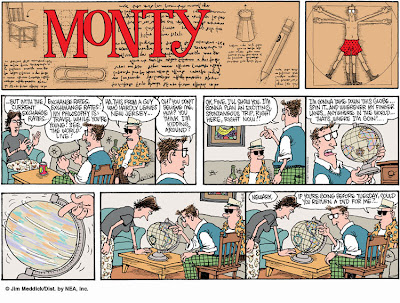 Today's two-fer has two different spins on the same punchline.  The first is from Jim Meddick's Monty.The second is from Saturday Morning Breakfast Cereal, by Zach Weiner.  I'm a bit surprised to see that this is at least the second time Newark has been referenced in this blog... although it's certainly not the first time New Jersey has been the butt of jokes in map-related comics.  But this is the first time Utah has been referenced... so we're up to 27 states referenced in map-related comics.  Which state will be next?  Which state will be last?
Posted by Blue Sky GIS at 12:47 AM