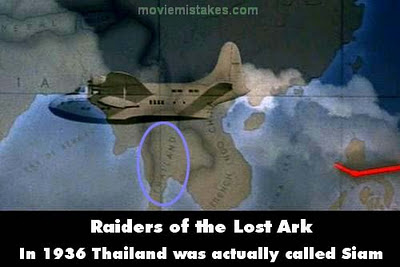 One of the more memorable, I daresay iconic, map animations in cinematic history involves the travel/map sequences from the Indiana Jones franchise.  Here's an image from one of those sequences from the first movie "Raiders of the Lost Ark" where somebody has pointed out an error in the background map: The area labelled "Thailand" was actually called "Siam" during the timeframe in which the movie was supposed to be taking place.

This came from an internet item from Moviefone.com entitled The 15 Worst Movie Mistakes in History.  Frankly the items listed in the piece don't strike me as all that bad.  They're kinda nit-picky, mostly continuity errors and extras/props being visible where they shouldn't be.  I'll grant in this age of CGI many of those mistakes should have been eliminated, but none were glaringly obvious and/or damaging to the plotlines.  And certainly none comes anywhere close to rising to the level of "Worst movie mistakes in history".  The black hole that constitutes the plot(s) of any/all of the Transformers movies, that might be a "Worst movie mistake".  The second and third Matrix movies squandering such a perfect first in the series, or Lucas' pillaging of the original Star Wars trilogy (and just don't even speak the name of the Star Wars Holiday Special), or the completely ridiculous notion of an invasion of the U.S. that is the premise for Red Dawn (not to mention that the movie is a favorite at terrorist training camps and among those who kidnap child soldiers), any of those could qualify as a "Worst Movie Mistake in History", not some simple editing oversights.

But let's not stop there.  While I wasn't able to find a clip of the actual map-background travel scenes from any Indiana Jones films, I was able to find a tribute video of sorts made by one Jason Byfield who wanted to make a map animation in the style of the Indiana Jones map travel sequence:

Of course what I actually need is the map room scene from "Raiders..." That'd be perfect for the blog, no?
Posted by El Cucui at 12:47 AM