Today, in honor of Girl Genius winning the Hugo award for the Best Graphic Story for the third year in a row (read the graphic acceptance speech... and the other one in 2009) I'm doing a Girl Genius Tuesday Two-fer... Which is tough because there's actually a LOT to choose from.  Phil and Kaja Foglio have mentioned maps several times in their Girl Genius webcomic and occasionally have drawn some rather beautiful maps.  So I think I'll do two sets: An amazing 3D scale model battle map, and an amazing 3D virtual map (and an extra set at the end). Here goes: 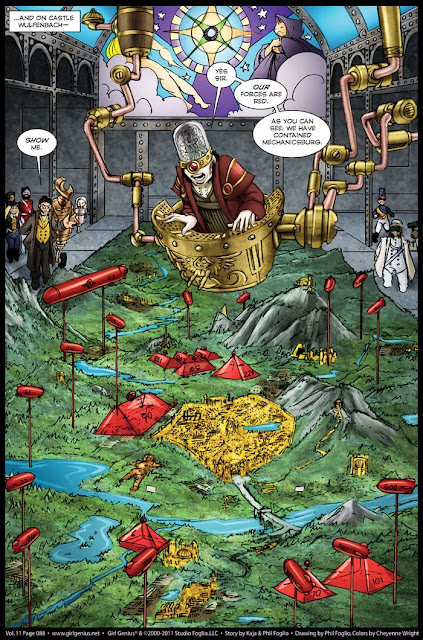 The first is a simply spectacular depiction of a scale model map of the town of Mechanicsburg, home of the artificially intelligent and homicidal Castle Heterodyne, which is under siege/protection by the Baron Wulfenbach, as well as under attack by practically every other fighting force in Europa, as the power struggle rages to see whether there is, in fact, a new Heterodyne heiress. This amazing map, by the way, is in one of the many, many chambers inside the ridiculously vast flying Castle Wulfenbach airship.

The next set is part of the story arc where our heroine Agatha Clay/Heterodyne is in her broken ancestral artificially intelligent and homicidal castle looking for a 3D map of the castle that will show them where further repairs need to be made: 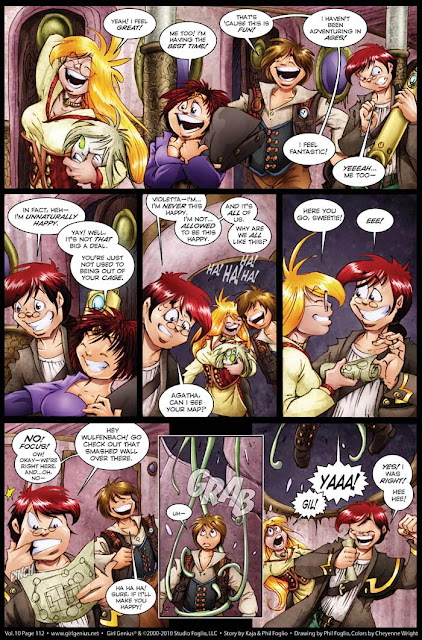 With her are Violetta, an elite Smoke Knight who serves the Sturmvoraus family, Tarvek Sturmvoraus, Prince of Sturmhalten, and heir to the throne of the Storm King (well, he's the actual Storm King now, since his father was killed by his clank-daughter just before he tried to restore Agatha's mother/The Other into Agatha's body/mind), also Gilgamesh Wulfenbach, Tarvek's rival, and heir to the aforementioned Baron Wulfenbach's European Empire (his dad might also be dead).... Also Agatha is carrying the severed head of Otilia, the Muse of Protection ...only that's not actually Otilia, it's actually another copy of the Castle Heterodyne's fractured, and somewhat insane, identity. The identity of Otilia was actually Madam Von Pinn, nanny (not kidding), who ripped apart Agatha's adoptive parents, but who's identity has since been transferred into into a giant mechanical cat. ...Is this a great story or what!

Gil there in the bottom panels is getting abducted by a psychedelic Audrey II-esque plant. 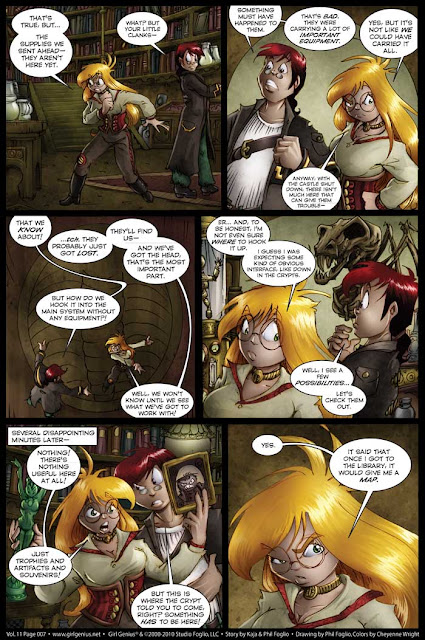 So after their ordeal with the plant (and another hyper run-in with the Heterodyne pretender, Zola), Tarvek and Agatha get around to looking for the 3D map in the library... now where could it be...? 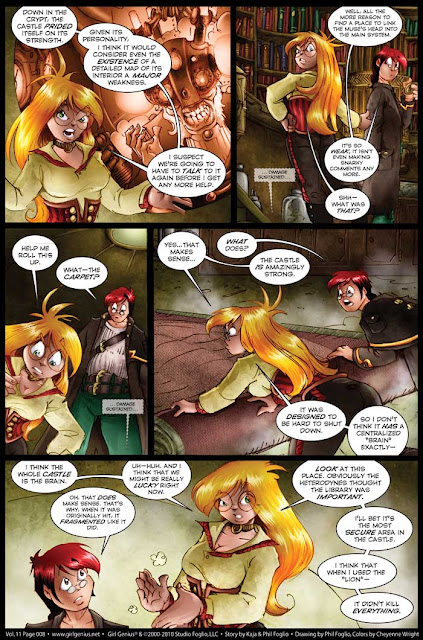 ...under the rug? (by the way, here's the episode of Agatha talking to The Castle the first time 'round) 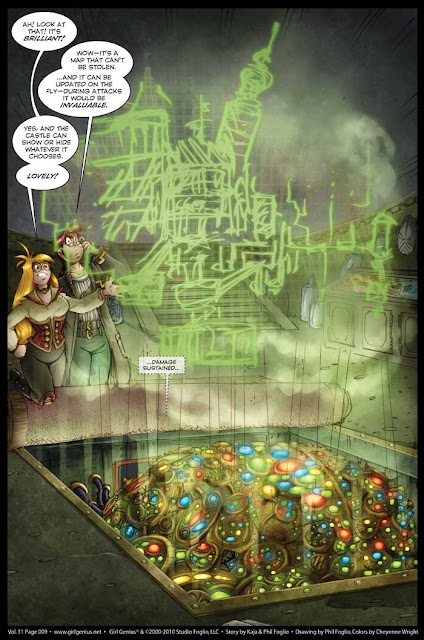 Ah! There it is! That's a pretty neato 3D steampunk map, wouldn't ya say? 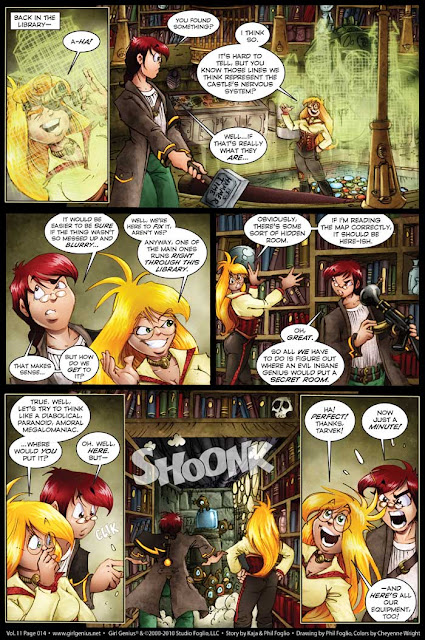 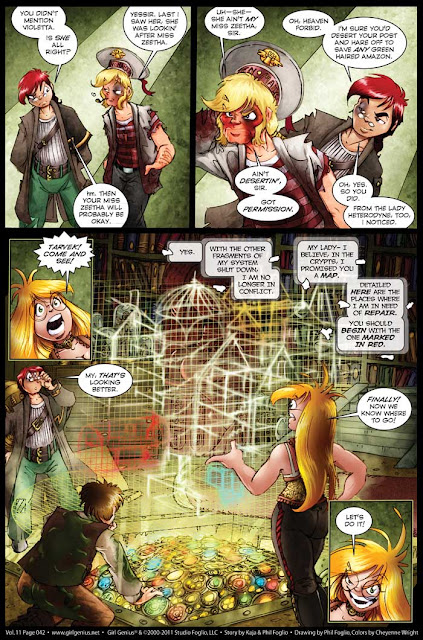 ... and with a few repairs, the lovely 3D map's looking much, much better, yes?  By the way, that rather battered gentleman is Airman Higgs.  Ya know, Higgs.... He has a map too... 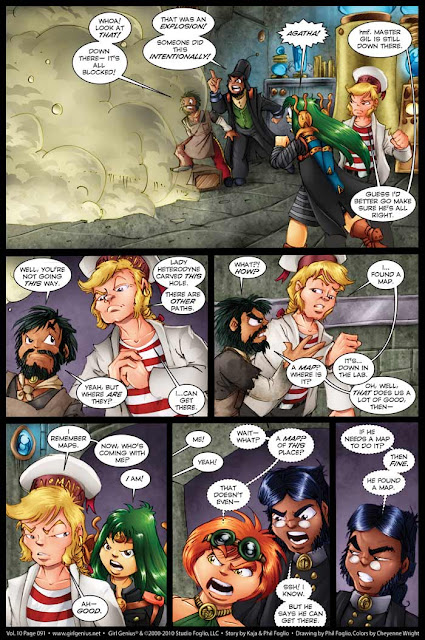 ...apparently.... Let's see, this is before the 3D map, and just after Zola has escaped and caused a collapse that sealed off Agatha-as-The-Other, Tarvek, Gil, & Violetta in Lucrezia/The Other's old secret sub-sub-sub basement lab, separating them from the rest of their crew, which includes Higgs, Zeetha (the green one, Princess of the Lost City of Skifander), Molech VonZinzer, Theopholous DuMedd, Sleipnir O'Hara, and Professor Diaz in the tall hat (who I think ends up dead later... I don't quite remember). 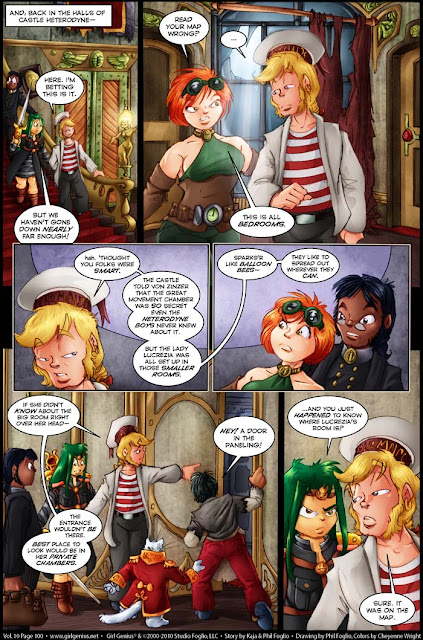 Well, that more than sums it up for today's map-related Girl Genius extravaganza. There's a few more but we'll take a break and get to those later.  Meanwhile I recommend heading over to Girl Genius and starting from the beginning of the story and enjoy the whole way through.  It's very worth it.
Posted by Blue Sky GIS at 12:47 AM