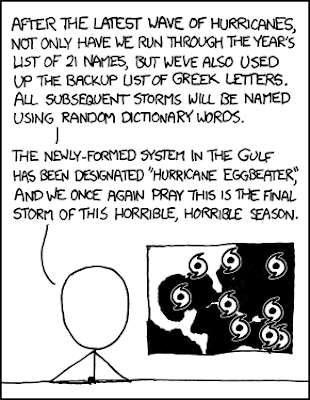 I don't know that this is going to be a particularly heavy hurricane season, but Mr. Munroe's XKCD has this take on hurricane naming

At the actual webcomic, hovering over the image reveals this additional message in the "title-text":

After exhausting the OED, we started numbering them. When overlapping hurricanes formed at all points on the Earth's surface, and our scheme was foiled by Cantor diagonalization, we just decided to name them all "Steve". Your local forecast tomorrow is "Steve". Good luck.

I have no idea what "Cantor's diagonalization" is, and that's even after I looked it up on Wikipedia.

Also, I thought that I would mention this Kickstarter project to make a documentary about cartoonists: