20 years ago this week the Soviet Union ceased to exist. The Soviet hardliners staged a coup to wrest control of the nation from the reformer Mikhail Gorbachev, but in the ensuing popular backlash the Soviet Union fell apart and Boris Yeltsin became the new leader of Russia and the world gained 15 new independent nations. In a fit of nostalgia for the Cold War geography, let's have a look at map-themed anti-U.S.A. Soviet propaganda, shall we? These are from EnglishRussia.com (Collection 1, Collection 2, Collection 3 ... if you visit that site be careful about scrolling all the way to the bottom of their page... there's often NSFW material there at the bottom). 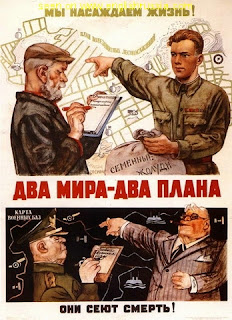 The text says: “We sow Peace! They sow Death! Two Worlds – Two Plans!”. In the American part of the poster, the lower one, it says “locations for army bases”. Of course I suppose we're supposed to ignore the irony of the symbolism of the military directing the civilian in the "good" Soviet model vs. the civilian directing the military in the "bad" U.S. model.... and who knows what the wizened old farmer there is thinking about this upstart army recruit telling him how to do the farming he's done for decades. 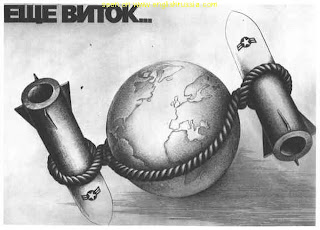 The text says: “One more turn and…” 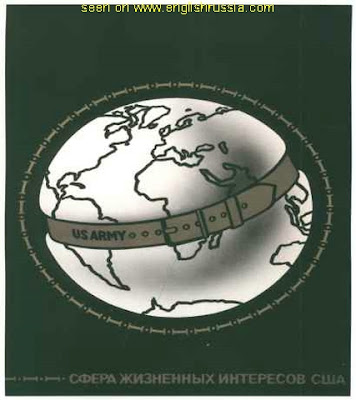 In a similar vein, this one says “Sphere of USA Vital Interests”. 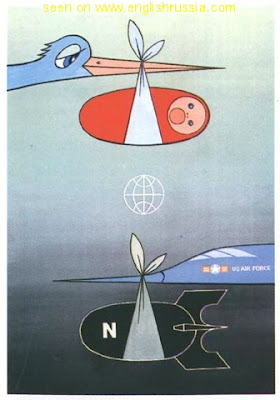 No text. You get the idea. The little globe symbol in the middle is the map part. The "N" on the bomb is for "Neutron bomb", which was particularly odious to the Soviets because it was specifically designed to kill people while preserving property. Even a US general referred to it as a "capitalist bomb"... though the Soviets did build a few anyway. 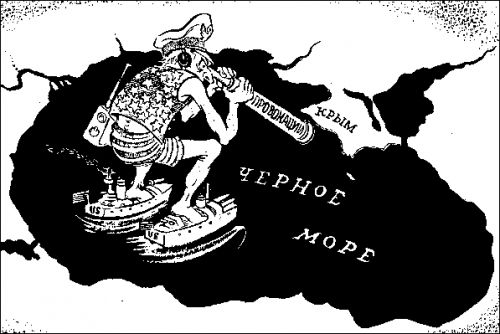 Here's Uncle Sam and his Navy spying on Soviet lands in the Black Sea using a spyglass that's labeled "Provocation". 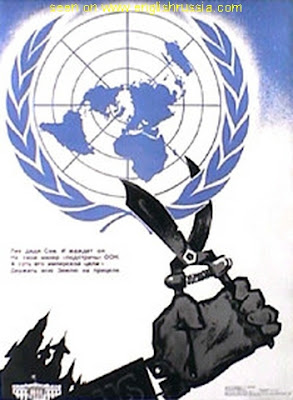 The translator says the text on this one is hard to understand. You can just barely make out The White House below the missiles in the lower left-hand corner above the arm of the U.S. gardener who is attempting to trim/destroy the U.N. and, presumably, the peace it represents. This one is a bit odd since often enough the Soviet Union railed against the U.N. as being a puppet organization to the U.S. ... so much so that in 1950 the Soviet Union boycotted the U.N., which made it possible for the U.N. to pass a resolution allowing it to go to war in Korea against the North Korean communists... the Soviet Union never made that mistake again. 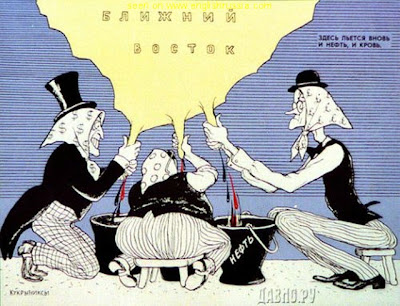 That's greedy Uncle Sam on the left and the British "milkmaid" on the right... I'm not sure who that's supposed to be in the middle. But that's supposed to be the Arabian Peninsula that they're all milking. The text says: “Here again blood and oil is being poured”.... This one at least has a legitimate point. 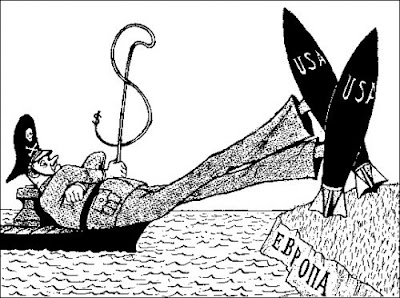 No text. The land there is Europe, which the U.S. is using as its footstool 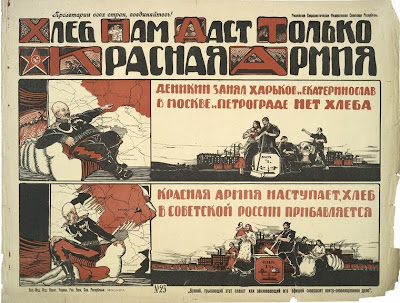 This one is just Red Army propaganda, not anti-USA. Some of the text reads: “Only Red Army will give us bread! Red Army advances – the bread stocks are growing”. The guy on the left has a backdrop of maps... but I'm not entirely sure whether he's supposed to represent a good guy or a bad guy. The fat/skinny juxtaposition confuses me. 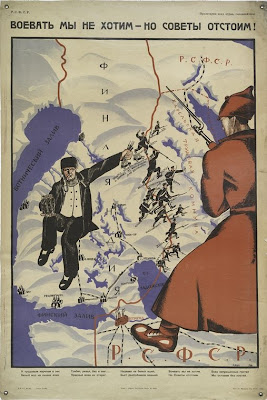 Just to show that the Soviets could be equal-opportunity propagandists, this one is WWII-era concerning Soviet-Finnish hostilities (during WWII Finland fought 2 wars against the USSR, the second time allied with Nazi Germany...and 1 war against Nazi Germany... and won all three). So it's anti-Finn (notice the fat guy with the stein) not anti-US. The text says “We don’t want the war – but we’ll defend the Soviet lands”... which was the Soviet propaganda trying to claim that Finland was the aggressor.
Posted by Blue Sky GIS at 12:47 AM