Many moons ago I posted an example of map coordinates being used in a Phantom strip. In that post I predicted that I'd never again post another example of maps in The Phantom.  How very wrong I am now making myself.  Here is an entire story arc that begins with cartographers getting themselves into some trouble by mapping a place that they weren't supposed to know about.  Darned cartographers! Let's get through this, shall we? 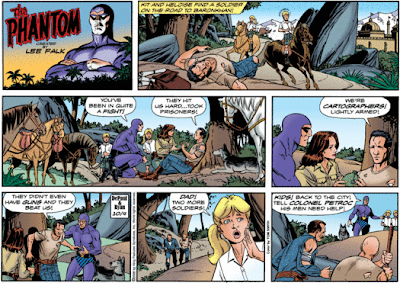 "Lightly armed".  I like that. Why would cartographers be armed at all?  Those are some insanely fit cartographers. 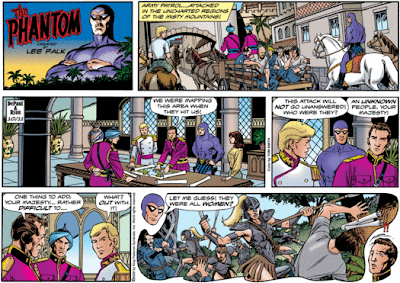 Women warriors!?!?! GASP!!! And yet a guy strolling about in stripey purple underwear with his whole family is nothing of note. And yet, somehow, the story arc gets so, so much more misogynistically worse. 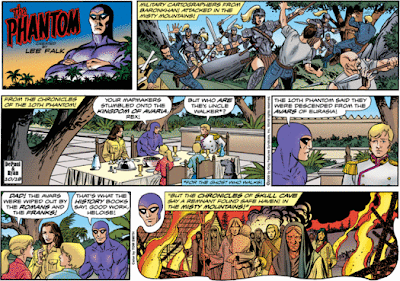 ...fierce warrior women who have had no contact with the outside world for hundreds of years.  No chance of problems with inbreeding there.  And the little footnote to explain the guy's nickname... as if that's the part of this whole thing that needed the extra clarification. 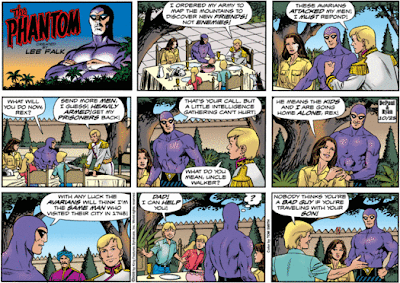 Ah, I see.  They were mapping unknown new lands looking for new people for their ridiculously handsome young monarch to make friends with... and they accidentally stumbled upon a force of fierce women.... who are so astoundingly dense that they'll naturally recognize this guy as a 250+-year-old visitor from the past (they are all blonde after all).  So naturally this is work for the menfolk in the family.  That kid's logic is incredible! 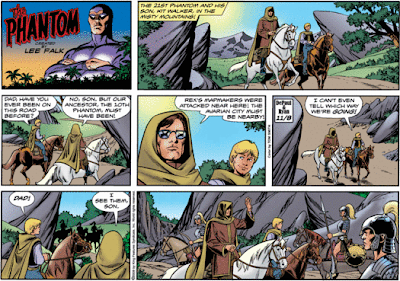 ...and the parents fall for it. So the rest of the story-arc goes like this: The Phantom and his son are captured anyway (by the way, mom and sis head off home, but not without first making a quick shopping excursion through Europe... Not kidding!).  The Phantom (or maybe it was the kid...?) engineers an escape from the prison where the cartographers were kept by blowing a hole in the city wall.  They escape and then avert war between the neighboring nations by.... well, by making friends.  It's just a big gigantic pile of stupid.
Posted by Blue Sky GIS at 12:47 AM