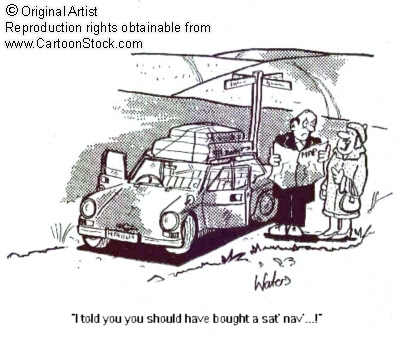 Artist Graham Waters gives us this "spouses arguing about directions" + GPS gag.  It's pretty bland, though.  Not a lot of humor in the depiction of a simple "I told you so".

Sat' nav', by the way, is the British term for GPS, because GPS is the term specific to the U.S.'  NAVSTAR GPS satellite navigation system.  GNSS (Global Navigation Satellite System) is the term that covers all of the technologies. GPS is the only fully-functional global satellite navigation system. Galileo is the Euro version and is in the middle of its deployment phase.  The Russian version is called GLONASS, but it's currently only regional, though it's global deployment is planned. The Chinese are working on expanding their regional Beidou navigation system into the fully global Compass navigation system.  There was a years-long negotiation/fight between the U.S. and the Europeans about whether and how to make GPS compatible with Galileo.  In the end they were made to be compatible and most new GPS and sat. nav. products will use both.  I think I read that the GLONASS will also be compatible. India and Japan both have smaller regional systems.  So does France.

Of course the original cartoon up there still isn't very funny. Sorry.
Posted by Blue Sky GIS at 12:47 AM