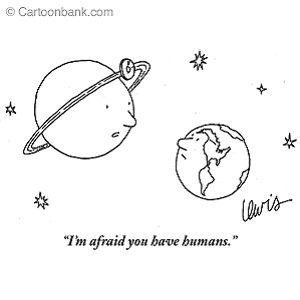 Eric Lewis had this cartoon published in The New Yorker in October of 2002.  If that's Saturn playing the doctor she/he might want to be careful.  Saturn's moon Titan is right now the solar system's next best candidate for life.  If it doesn't watch out Saturn could get itself infected with life, then maybe it'll eventually have humans too
Posted by Blue Sky GIS at 12:47 AM