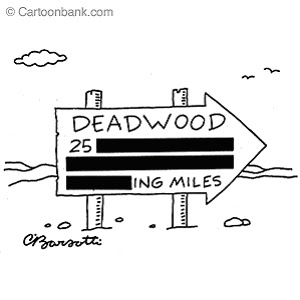 Charles Barsotti had this published in The New Yorker in March of 2005, at the height of the popularity of HBO's "Deadwood" show which, if you don't remember it, became known for it's foul language.  But the language is also rather well written, or so I'm told.  I never actually saw the show.
Posted by Blue Sky GIS at 12:47 AM