So there's the iconic original painting by John Gast personifying the goddess Columbia (who used to do a LOT more stand-ins representing the USA than the often sour-pussed Uncle Sam) and is often associated with the concept of Manifest Destiny.

And then there's this recent version by Australian cartoonist David Pope, who apparently takes a rather dimmer opinion of expansionism in his country. 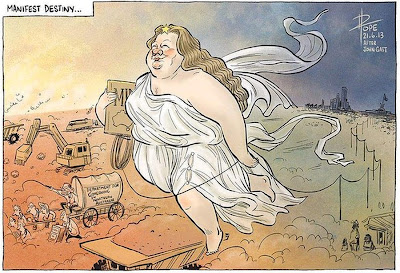