I was hoping that for today's two-fer I'd have some more cartoon maps of recent/upcoming primary states, but I couldn't find anything new for Nevada, Minnesota, Missouri, or Colorado. If ya got anything then please send it in.  In the meantime all I've got are two election-related cartoons:
The first is from Daryl Cagle and is from the 2008 POTUS election season which at least shows an anthropomorphized Nevada... and some other states.... including Michigan ... and even though those are from four years ago, I think I'll still count them towards our tally of states specifically mentioned in our maps-in-comics blog here  (now at 33 of 50): 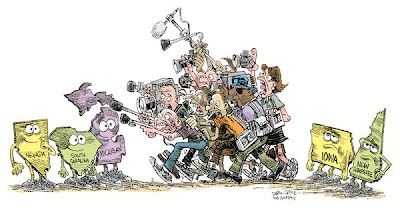 The other one is a shot at Mitt Romney for his Swiss bank accounts by Bill Day.  The visual gag is clever enough... but Mitt's hair is never this mussed. 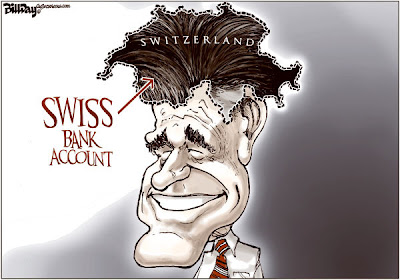 By the way, I am keeping in mind the appearances of country maps in our blog, and after each of the 50 states gets featured on this blog I'll show the list of which countries have and haven't been featured... and we'll see if we can get all of those... although Angora might be tough.  But if you find any other nations featured in maps in comics lemme know.