The world according to Hollywood 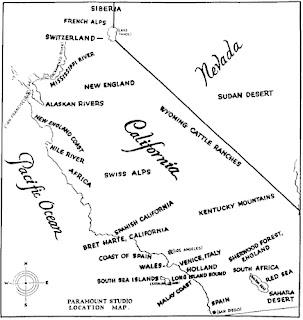 This is a map of locations used by Paramount Studios for various settings when they needed to shoot movies that took place in other parts of the world but couldn't or wouldn't actually go there for shooting.  Click on the image to see a more legible version.  I've heard of biologists who chuckle when they hear pacific tree frogs chirping in movies that are supposed to be set in places thousands of miles away from where they live.  Then there was the innumerable shots in M*A*S*H that were supposed to be Korea, but were unmistakable to me as SoCal chaparral. What was worse was the Dukes of Hazzard chase scenes supposedly in Texas, but almost always in that same SoCal scrubland.  Texas doesn't have those kinds of mountains. Then there was a scene in the very fun movie "How I Got Into College" where the main characters are zipping along as fast as they can go to get their college applications in on time and, as they're driving along what is very clearly Southern California highways, there's a sign that says "Welcome to Michigan". But that movie was filmed at my alma mater Pomona College so I'll forgive them. And it's a very funny movie.
Posted by Blue Sky GIS at 12:47 AM