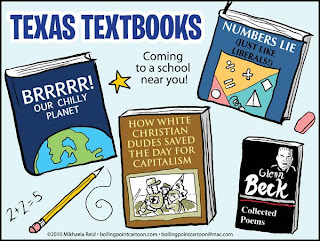 An editorial cartoon by Mikhaela Reid. This was a comment on the controversy about the Texas Board of Education approving history textbooks which presented a... "different" take on history. It is far, far cheaper for textbook producers to make one textbook for the whole nation's public schools. So those publishers seek to get their books approved in the largest states, because after the larger states are sold, the smaller states tend to follow (not that they have much choice at that point). So the textbook publishers have learned to keep anything that might remotely be considered controversial out of the history textbooks because they don't want to risk not making a sale to the people who get themselves on to the larger states' textbook advisory boards. That's a lot of the reason history can be so boring: All the exciting stuff gets cut. In this controversy the Texas board was seeking changes in the history texts that weren't supported by historical facts. It led to a lot of school boards around the country looking for textbooks that weren't influenced by Texans.

The book with the title "Brrrrr! Our Chilly Planet" is the one that qualifies this editorial cartoon for posting here, with its image of something vaguuely Earth-like. Of course a big fat textbook on just climate or meteorology is unlikely to find its way into a public high school curriculum, no matter what it's climate change position might be.
Posted by Blue Sky GIS at 12:47 AM