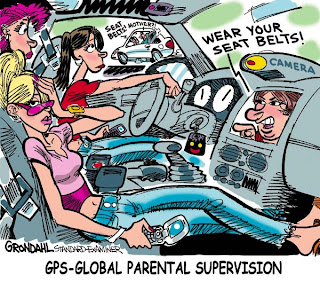 Calvin Grondahl is one of my more favorite editorial cartoonists, but this particular cartoon doesn't fully engage me.  However it's nice to see him use a GPS theme.  It presents a concept similar to this one in Wales.

I'm not sure when this ran, but it may have been in connection to this system or systems like it which use a DVR technology to record activity inside and/or outside of the car and, if the system notices a sudden change in acceleration, like an accident, or erratic driving, the device keeps the video record of the events.  Insurance companies like it.  Some parents think it's great.  Personally I think it's a good idea.  Progressive has a program that puts a little device is the insured car that monitors driving habit and gives a discount for good driving.  It's not as sophisticated as the camera system linked above. In the 1990's, towards the beginning of the advent of the "1-800-How am I driving" bumper stickers, there was a group of parents which got an 800 number and bumper stickers and put them on their family cars once their teens started driving.  The teens hated it.  Then the calls started coming in... mostly on times the parents were driving.  The teens suddenly thought it was fantastic.