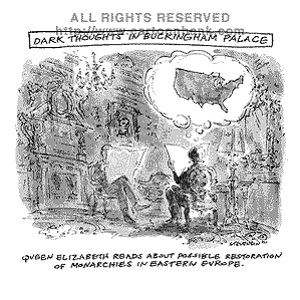 This was published by James Stevenson in March of 1990 in The New Yorker, soon after the end of Communism, when some people were seriously considering the restoration of monarchies in some of the former communist states.  That, of course, didn't happen, unless one counts Belarus, which has become a dictatorship.  The rest have more or less adopted various forms of democracy.  I figured this was a good one to do just before a July 4th weekend.
Posted by Blue Sky GIS at 12:47 AM